Where will you be ‘directing’ preferences? 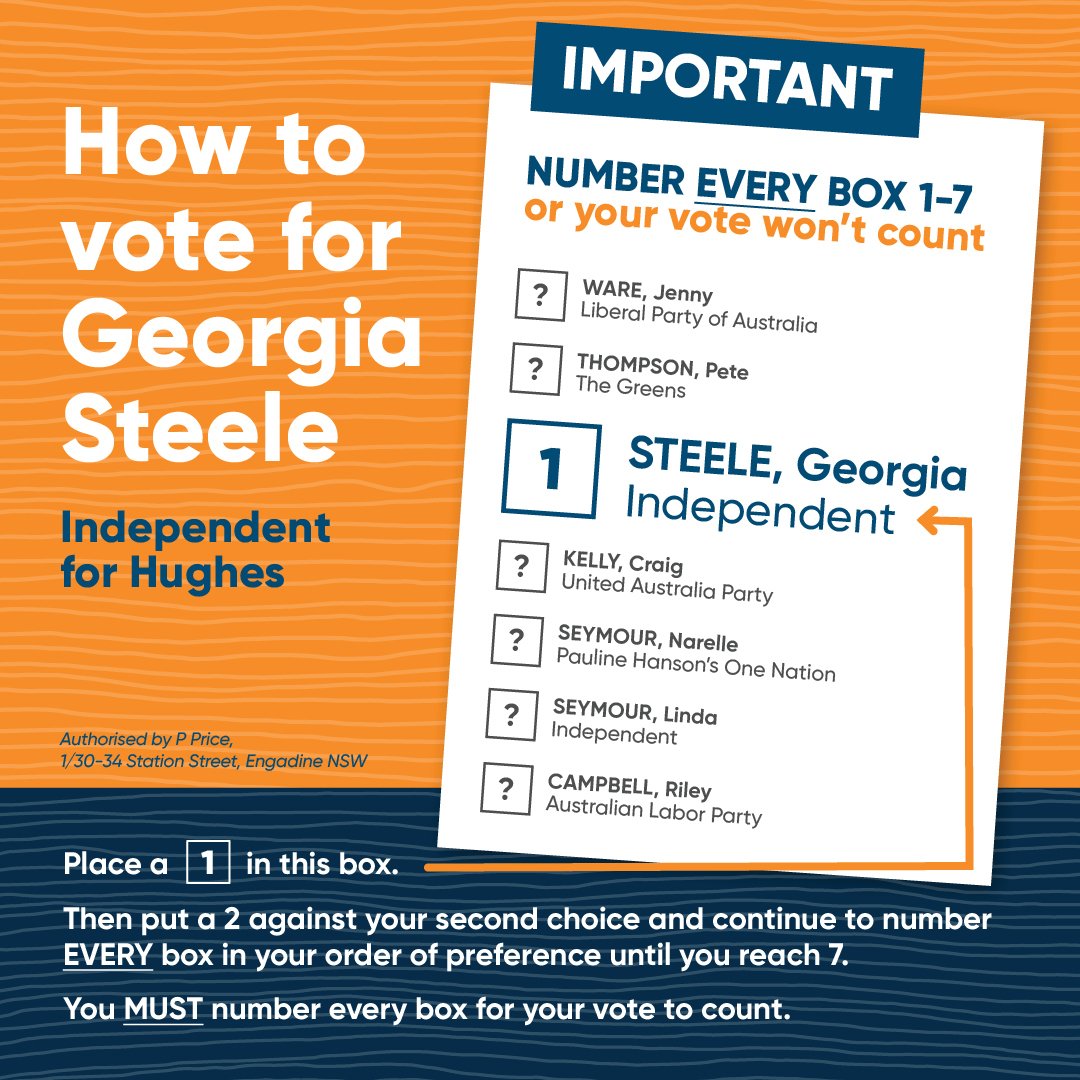 The short answer is – I won’t be 'directing' preferences.

The longer, more important answer, is this: preferences belong to the voter. Candidates can make suggestions, but the power to actually decide who will be listed second, third, fourth, etc on the ballot paper lies only with the person who fills out that ballot paper.

Preferencing is the voters’ superpower! If the candidate you ranked as number 1 on your ballot paper receives the least amount of votes, they are taken out of the race, or eliminated. If this happens, your vote literally goes to your second choice candidate, without losing any of its power. Then, if that person you put a '2' next to gets eliminated, your vote moves to your third choice, your third ranked candidate. And so on, until one of the candidates crosses the magical 50% mark.

Neither I, nor any other candidate, nor any party, has the power to 'direct' preferences. 'How-to-Vote' cards are only ever suggestions. And candidates have no behind-the-scenes interaction with the AEC, telling them where their preferences should be allocated (a common misconception I am asked about).

I will not be suggesting preferences because I desperately want voters to take some time to check out the candidates. Now that the candidates have been announced, I'd encourage you to spend even a few minutes looking up each person.

The power is yours. Use it wisely, and deliberately.

Who would you support in a hung parliament?

The next most common question I am asked is, who would you support in the event that neither of the major parties (the Labor Party or the Liberal National Coalition) wins enough seats to form government? In other words, if the election produces a 'hung parliament', to which party would you guarantee supply?

If you're not familiar with the term, to guarantee supply simply means agreeing to pass critical pieces of legislation which allow the government of the day to keep functioning.

The approach I will take if I found myself in a hung parliament situation is the same approach I will take to all decisions as a Federal parliamentarian. I will listen to both sides, analyse their policy positions, look at their track records on issues of importance, consult with experts, colleagues and most importantly, my community. I won’t decide anything in advance. And I will decide on the basis of what is in the best interests of the Hughes community.

Having said that, my platforms are clear and easily accessible. I have been posting my views on social media, and talking about them at community events, for months. If elected in a hung parliament, people who have been watching my campaign will not be surprised at the issues I place at the forefront of negotiations.

It's often suggested that I’m being “tricky” with this answer, having it both ways, having my cake and eating it too, etc. But let’s turn that around – what sort of an “independent” would I be if I said I would support a Liberal government, or a Labor government, in advance of the election? In advance of understanding their final platforms and priorities, the composition of their elected teams, the ultimate direction they take with their campaigns, right up until the end?

It's also just bad negotiating strategy to tip off the parties you'll be negotiating with ahead of the negotiation. If the party I was negotiating with knew in advance that I would support them, how would I get the best deal for the people of Hughes, on the platforms I've campaigned on?

And don’t forget, the way this is talked about, as is often the case in Australian politics, is negative when it could be positive. Instead of referring to a hung parliament, or minority government, why not instead call it a shared parliament or a collegiate government. Instead of a balance of power, we could have a community of power.

But Independents have no power – won’t it be a wasted vote?

There is absolutely no such thing as a wasted vote! (See explanation about preferences above).

Independents can have enormous power in Parliament. They can take their community’s concerns directly to the House, receive Ministerial briefings on upcoming legislation, and speak out, powerfully, on issues of concern. Like Zali Steggall MP on climate, and Dr Helen Haine MP on integrity. The national debates on those issues would not be as progressed as they are without the hard work and skillful advocacy of those Independents.

And of course, Independents can hold the balance of power (creating a community of power) in Parliament! If this happens, parties have to negotiate with Independents, on the issues their communities care about, in order to form government. In this way, Independents can be the circuit breaker Australian Parliament urgently needs right now – to achieve quick, effective action on urgent, modern problems.

Finally, a vote for an Independent, even if that Independent doesn’t win, will help make Hughes a marginal seat. Hughes has been a safe Liberal Party seat for 26 years. In that time, we’ve been taken for granted (at best), and ignored (at worst). It’s unfortunate, but true, that in our system only marginal seats (or seats held by Independents!) get the attention they deserve.

Are you a 'real' Independent?

This one is less of a question, and more of an accusation which is sometimes levelled at community Independents. Just to give you a few examples, since I launched my campaign, I've been called:

(and so many other things that are not fit to print …)

I can't possibly be all of those things – and, in fact, I'm none of them. I'm a genuine, community Independent.

It’s unfortunate that the state of our politics is such that people automatically look for hidden agendas in political candidates. I get it. It’s one of the reasons I’m running – this dire state of politics.

As a lawyer – I urge people to look at the evidence. I have never been a political staffer, and I've never even handed out 'How to Vote' cards for a political party. I’ve been critical of all ‘sides’ of politics, and my platforms straddle a range of what would normally be called ‘right’ or ‘left’ issues. This is because it’s the issues I care about, not the ideology.

As a human, though, I would say this. It’s easy to be cynical. Our politicians have let us down so badly, and for so long, that cynicism is an entirely natural state. And a hard one to break free from. Our party political landscape, for the most part, is devoid of a sense of community service. Party politicians don’t know - often don’t even come from – the communities they are supposed to represent. I’ve had a life. I’ve studied, worked hard, married, had children, before even considering going into politics. I know what it’s like to live in the real world.

And now I want to serve. Genuinely. A simple concept, some would struggle to believe it, but there you have it. And if you are cynical, perhaps that is the very reason to try something new?

So where has your fundraising money come from?

I am running on a platform of integrity in politics, including donation reform, so it’s very natural that people will be interested in how I am running my campaign. Transparency is incredibly important to me, and I’m proud to say that I have been the most transparent candidate when it comes to donations (certainly compared to the major parties! Never hear a peep from them about it!)

I am proud to be the only candidate in Hughes endorsed by Climate 200. Climate 200 is an organisation which supports independents running for Federal Parliament - candidates and MPs who back decisive, science-based climate action, and have the courage and vision to seize the incredible economic opportunity decarbonisation presents to Australia. Climate 200 has fundraised from more than 10,000 individual donors (listed on their website), and these donations are then passed onto the candidates for their campaigns.

I want to be crystal clear: the donations I have received from Climate 200 have absolutely no strings attached. I am running my campaign – no one else – and I decide how my fundraised dollars are spent. In fact, I launched my campaign well before I even entered discussions about donations from Climate 200. The organisation has never so much as followed up on donations they have made, and they have exerted absolutely no influence on me or my campaign. At all. I would obviously never accept donations from anyone, or any organisation, who sought to influence me.

It is also incredibly important to note that without the hundreds of local volunteers supporting this campaign, the money we’ve raised would mean nothing. I am proud of our fundraising efforts, but even more proud of the 300+ dedicated volunteers who are out in the community every single day, because they want change.

Why is there some negativity around your fundraising success?

Mixing money and politics is icky. I get that. The money that is thrown at both major parties these days, and some minor ones too, is obscene. (The amount I’ve raised is actually a drop in the ocean compared to this.)

When I decided to run for Parliament, I was determined to run a professional campaign. I started with the premise that the people of Hughes deserve so much better than they’ve had for decades – and that meant a candidate who was professional, capable, organised. A safe alternative. After all, I’m asking you to elect me to Federal Parliament, not to be put in charge of the Friday night chook raffle. To run that kind of campaign, raising money is crucial, not optional (unless you can fund such a campaign yourself, which I certainly can’t!).

Money in politics is something I’m determined to change. We need caps on donations, greater transparency, bans on donations from certain industries, lower disclosure thresholds, the list goes on.

But to do that, you need a seat at the table. And the others at that table in Hughes? BIG money. The Liberal Party, Clive Palmer’s UAP and its tens of millions … there is actually no comparison with the amount I’ve fundraised.

A final word on money and misinformation

The major parties and their supporters are scared of independents like me. We’re a new player in the ‘game’, and we are a very serious threat. After all, they’ve been able to take seats like Hughes for granted for decades. I don’t think we’ve ever seen this many corflutes (candidate signs), or had so much as a single visit by a government minister, let alone two in a fortnight.

Being threatened, they are obviously throwing out a few lines (lies) for people to regurgitate to discredit independents. “Fake independent”, “Labor stooge”, “Climate 200 puppet” (and so much worse) – sound familiar?

Don’t fall for it. It’s politics as usual, and it’s pathetic.

Hughes, stand proud. You have collectively – with donations and with volunteering – put your head above the parapet and said, “we’ve had enough. We deserve better, and we’re backing this one. She’ll do us proud.”

Be proud of the campaign we’re running, be proud of our transparency, our fundraising success, the enormous team of dedicated volunteers we have built, from the ground up. Over time, with skill and savvy, and sheer bloody hard work.

I’m sure proud. And the major parties are worried – because we’re looking like a red hot chance.

“The dominance of the major parties in Australian politics may have created stability in the past, but it’s not working anymore. Our major parties have, in recent decades, proven themselves unwilling or incapable to deal with new problems. Climate change, intergenerational inequality, the speed and complexity of geopolitical change; new problems need new solutions. If you’re in Hughes, vote for an Independent that’s #StrongerwithSteele.”