Georgia Steele’s art auction celebrates award-winning artists from Hughes and beyond. Our local artists have been severely impacted by the pandemic (with very little support from the government). 12 artists from Dharawal land (Sutherland Shire and South Coast) have partnered with us to bring together this exciting event, with all proceeds going both to the artists themselves and to support Georgia’s campaign.

Amy Hill is a contemporary Indigenous artist from the Kamilaroi Mob and a Sutherland Shire local. Amy is a recognised local Aboriginal Artist within the Sutherland Shire and a board member of the Kurranulla Aboriginal Corporation, where she has gained a great deal of knowledge listening to our Elders.

Amy runs Dewrang Art, which was the Local Business Awards Sole Operator of the Year in the Sutherland Shire for 2021. Dewrang is a Dharawal word meaning "High or lofty."

Amy has lived her whole life along the Georges and Woronora rivers on Dharawal Country and has been an active member of the Aboriginal community since she was a child. Amy says, “looking down to the river from my “high and Lofty“ home is wonderful, and inspiring. For me, Dewrang means home and symbolizes connectedness.”

Aristo Risi is a film maker and an award winning photographer. He has a passion for telling stories that create awareness about the ongoing threats to our ocean and its inhabitants.

Over the past 7 years Risi has worked on a wide variety of commercial and conservation video/photo projects, including roles as an underwater cinematographer.

In 2018 Risi won his first photography award for the US Nature Conservancy and then followed it up with his second award in 2019 for the Australia/New Zealand Sony Alpha awards. Both his winning images featured photographs of plastic bags floating in the ocean. 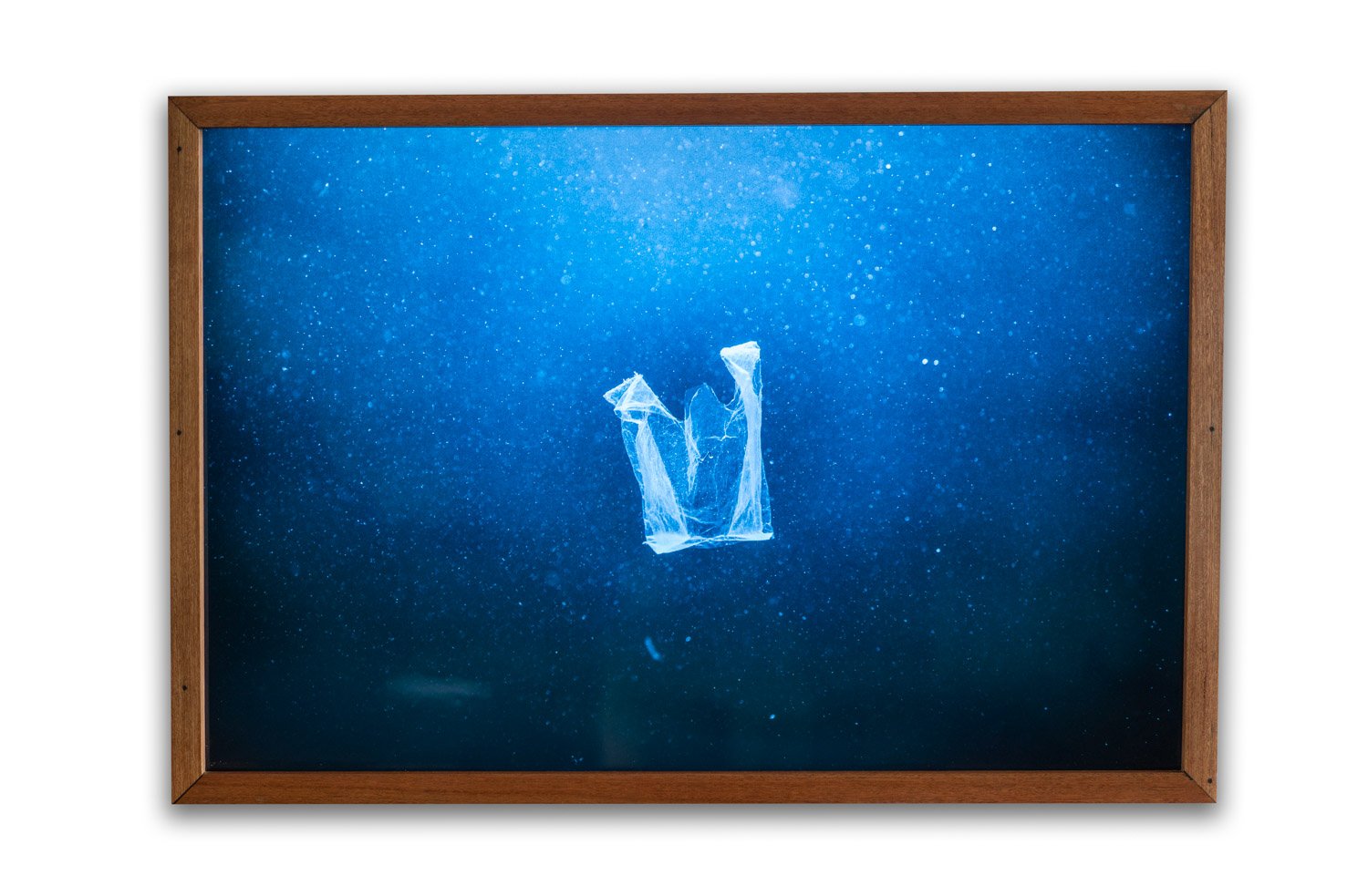 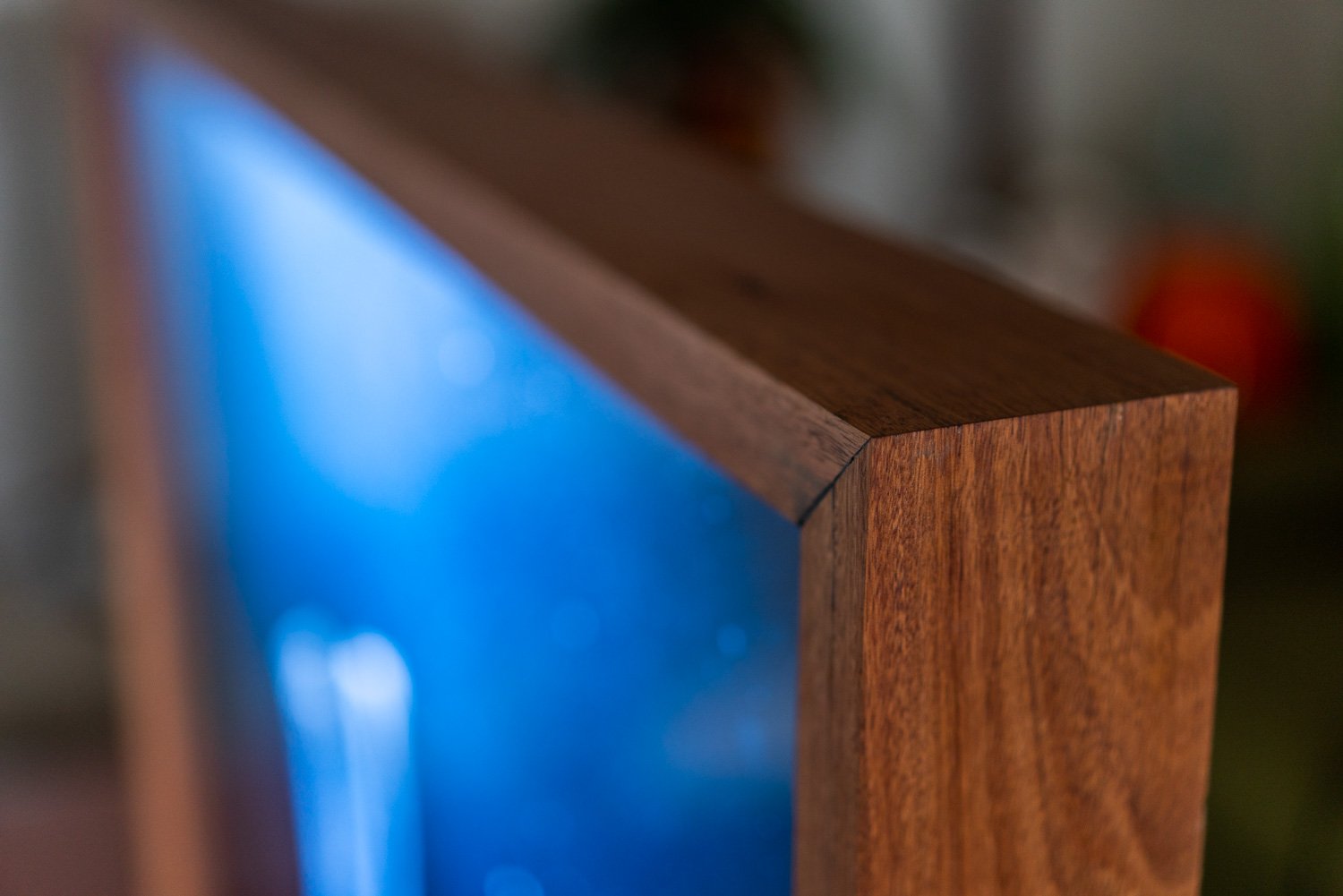 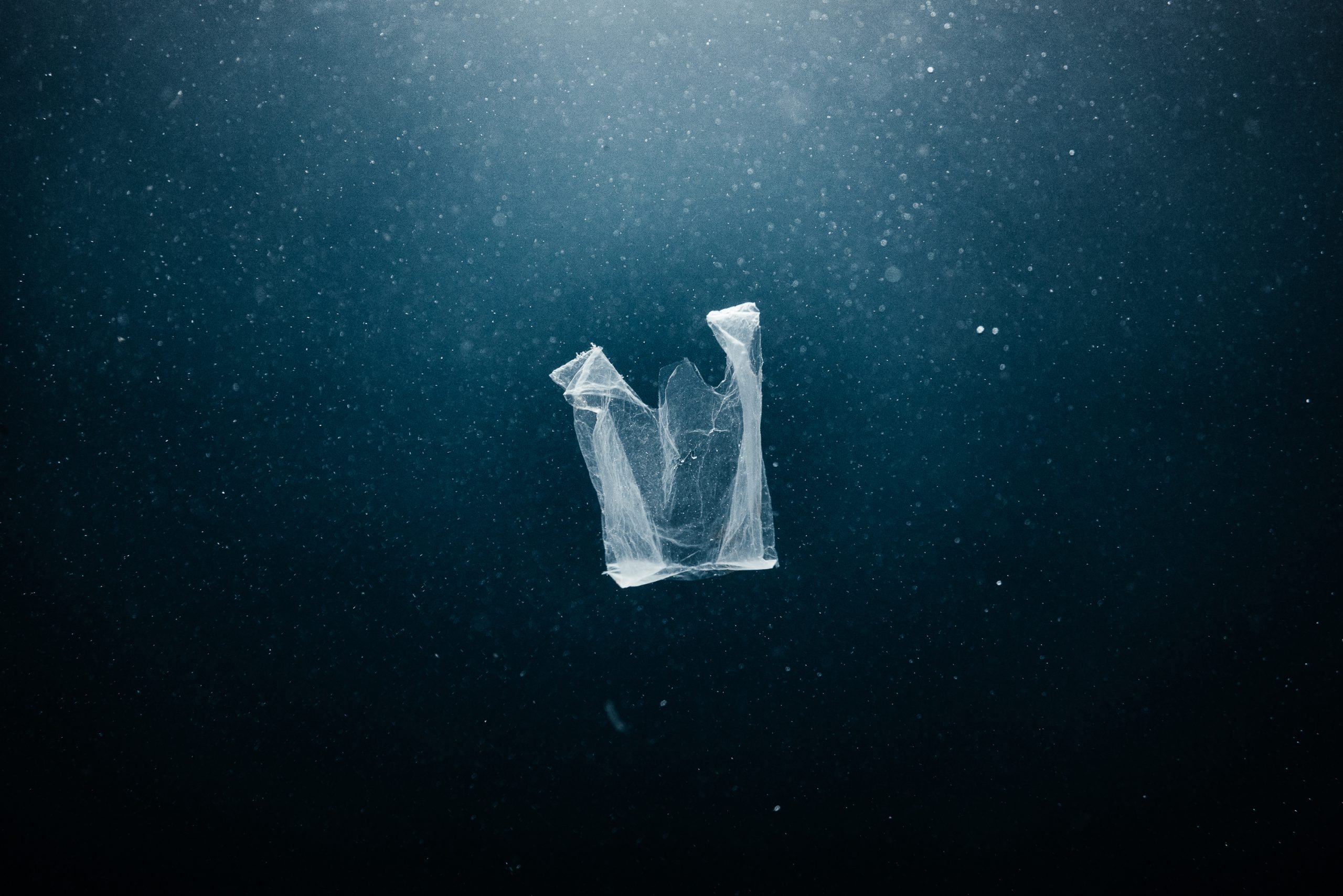 Aristo Risi's award winning image of a plastic bag floating in central Sulawesi off the Togean Islands, captured whilst freediving. Upon arriving at the dive site and seeing the currents had brought in a huge amount of trash, the dive plan was changed to try to clean the site up. During the dive Risi ruptured his eardrum and was out of the water for 7 weeks. This image went on to win the water category in the Sony Alpha Aus/NZ photo competition in 2019.

Risi is captivated by the way plastic tries to imitate life in the water: through movement and light the plastic bag dances in the currents, ready to poison any marine life that falls for its dark beauty.

Claire Cavanna is a freelance artist with a history of exhibiting and working in the fine art industry. Mark making has a strong presence in Claire’s creative process. Claire says, “Although linework is usually seen as a base in terms of drawing for artworks, lines to me become a major part of the overall composition allowing an expression that heightens the viewer's experience.”

Claire’s work is housed in the National Gallery of Australia Print Collection. 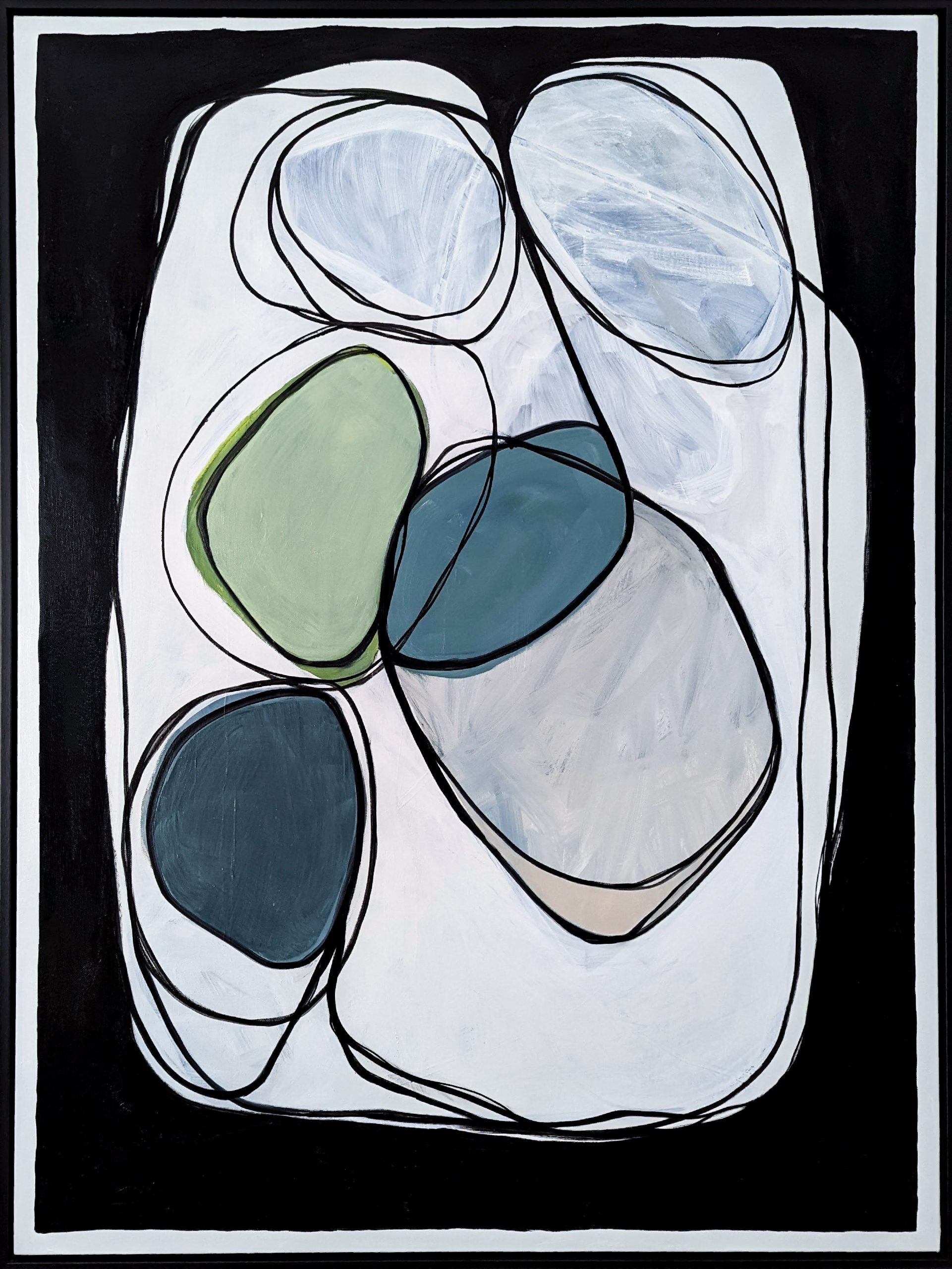 Rhythm of the Land - Nature re balancing with a little help from Kintsugi
Oil on canvas
124cm x 94cm framed in black stained Tas oak
This piece, as with all the images in the Rhythm collection of works, depicts the land emerging from all the pressures endured these past years - a sign of uncertainty but always hope for a better future.Kintsugi is the art of scars being as precious as the original piece - our land may never be the same but there is beauty within the regeneration. 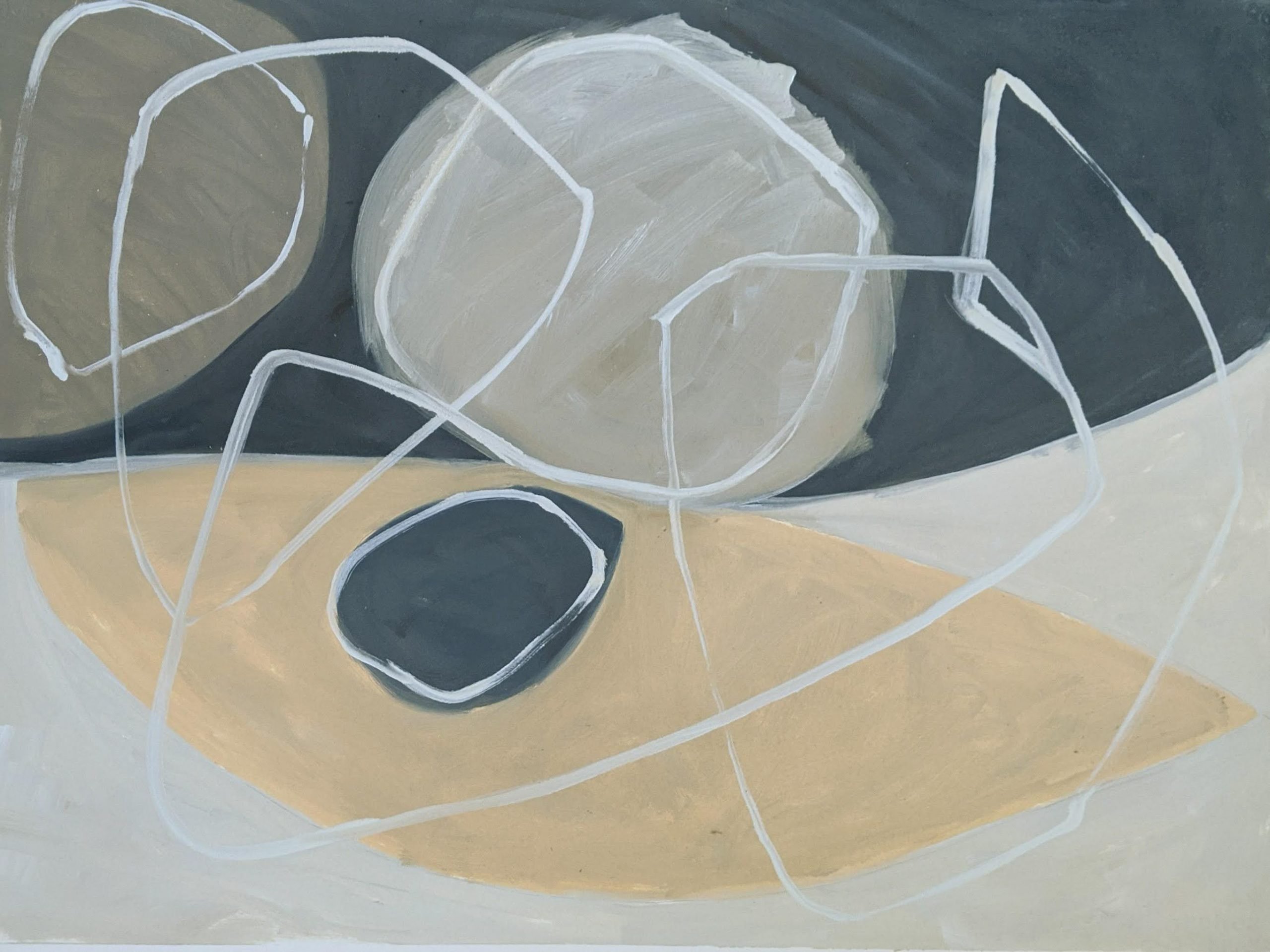 dMilo is a Como local. Inspired by a love of weird and wonderful nonsense which is seen in her art with a blend of colourful flair and eclectic style. dMilo has attended classes at Hazelhurst Gallery since 2016. Her focus is on creating art pieces with a unique complicated kind of nonsense. 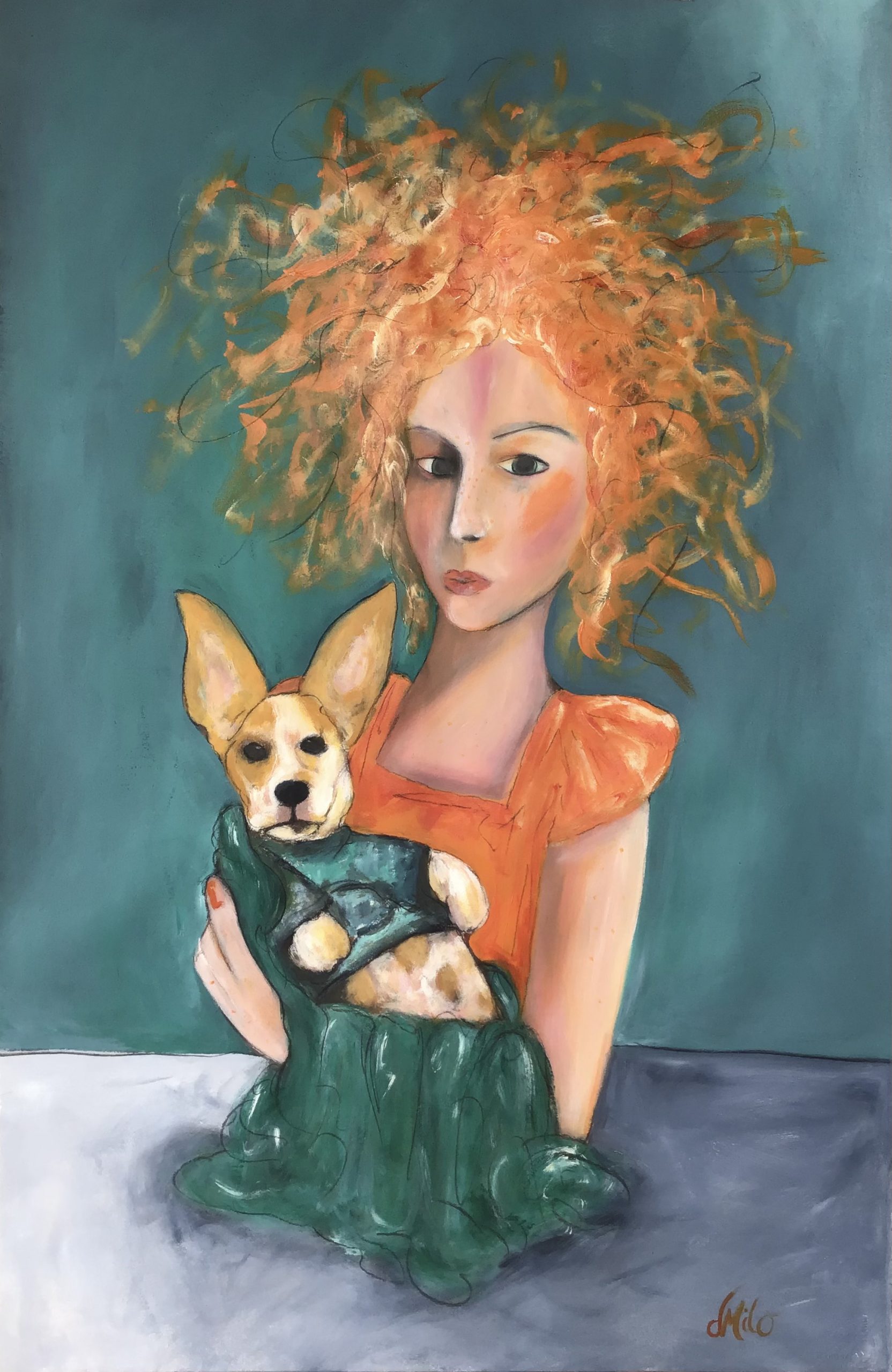 Laura’s passion for art stemmed from her upbringing in Zimbabwe, a country rich in contrast and brimming with creativity… and where art is often made out of next to nothing. Her father instilled in her an appreciation of this culture and encouraged her to become an artist. Laura travelled to England in 1998, and embarked on an exciting journey of working in galleries, studying and exhibiting her art. After completing an Honours degree in Fine Art, and a Post Graduate Certificate in Education at the University of London, she taught art for five years before moving to Australia with her family.

Settling in Sydney’s Royal National Park, with its plethora of exotic flora and fauna, invigorated Laura’s painting style. Her subject matter has always reflected a sense of place; so birds, the bush and seascapes are regular sources of inspiration in her work. Laura says, “I am fascinated by the strong Australian light; it resonates with the African sunshine of my childhood. I incorporate bold colours and vigorous brush strokes to capture this brightness. I also employ mixed media techniques to capture the immiscible concepts of everchanging nature and moments in time.”

Laura hosts regular workshops and classes in her home studio as well as monthly public openings as part of the Bundeena and Maianbar Art Trail. 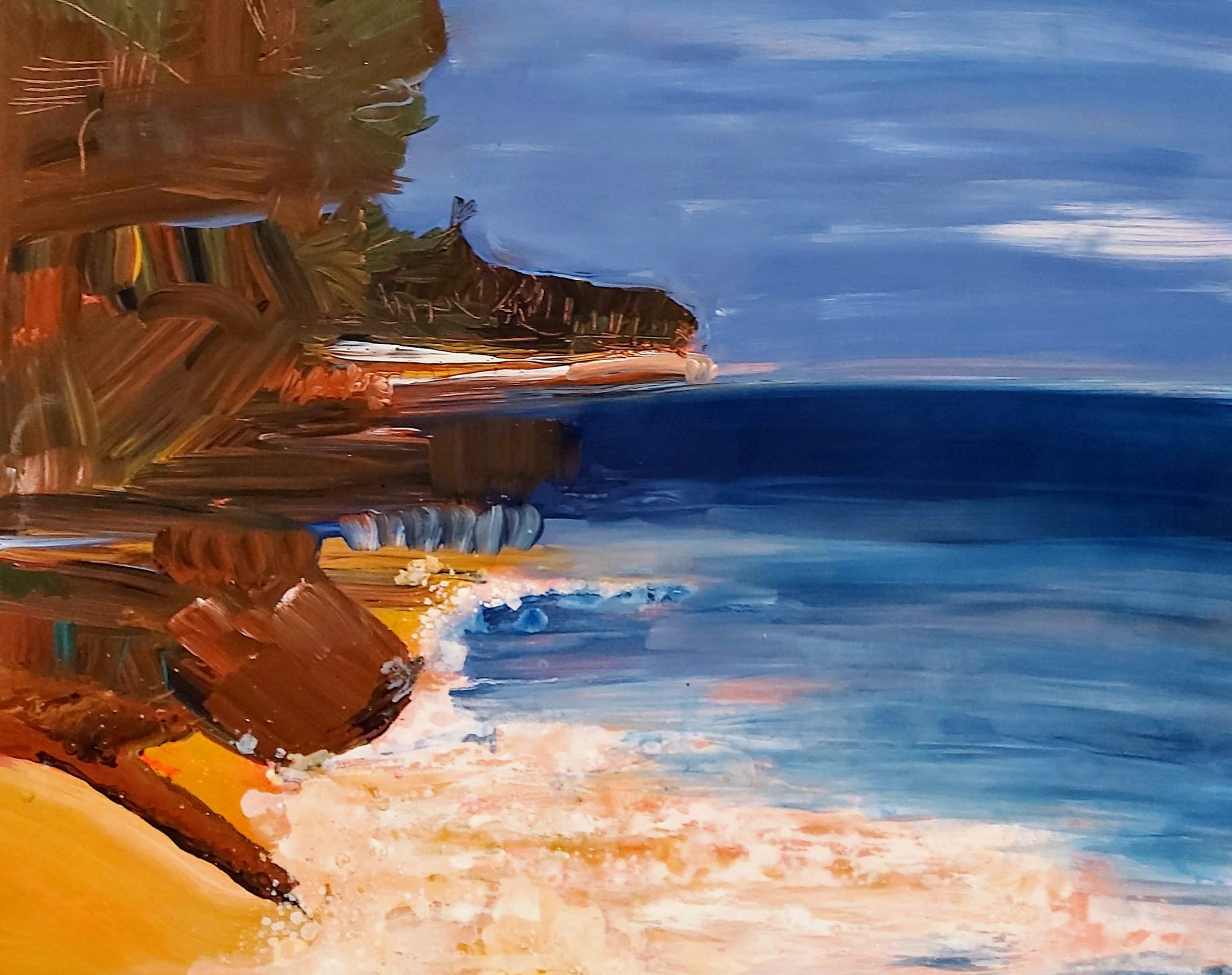 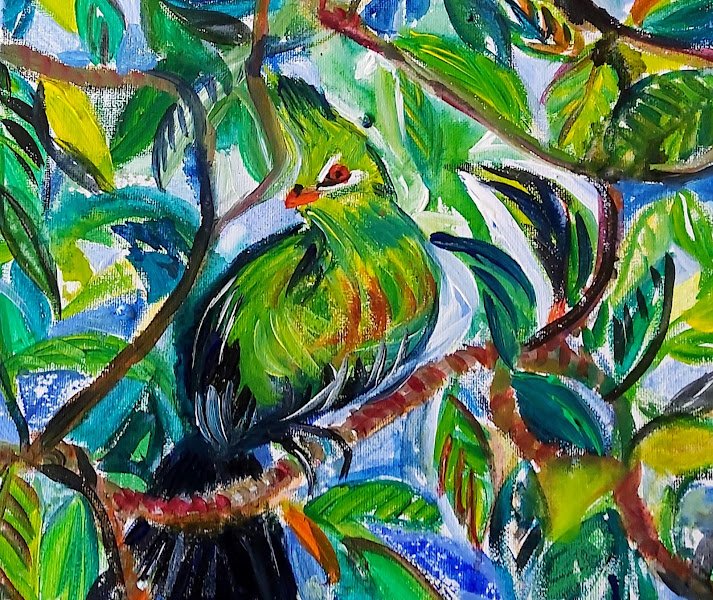 Como based artist Marnie McKnight has always followed a path of creative pursuits but recently returned to her first love, abstract painting, which has taken off in a way she hadn't expected. Marnie’s works now hang in homes, hotels and galleries around the world. Marnie’s paintings are often used in photoshoots for magazines and advertising campaigns in Australia, which links in closely with her love of interior design and herdesire to bring affordable, original art into every home. Marnie says, “I love the freedom that abstract art gives me and I hope that my paintings evoke calming, yet positive responses. I am always exploring new mediums, textures and inspiration - I would be delighted for you to follow along.” 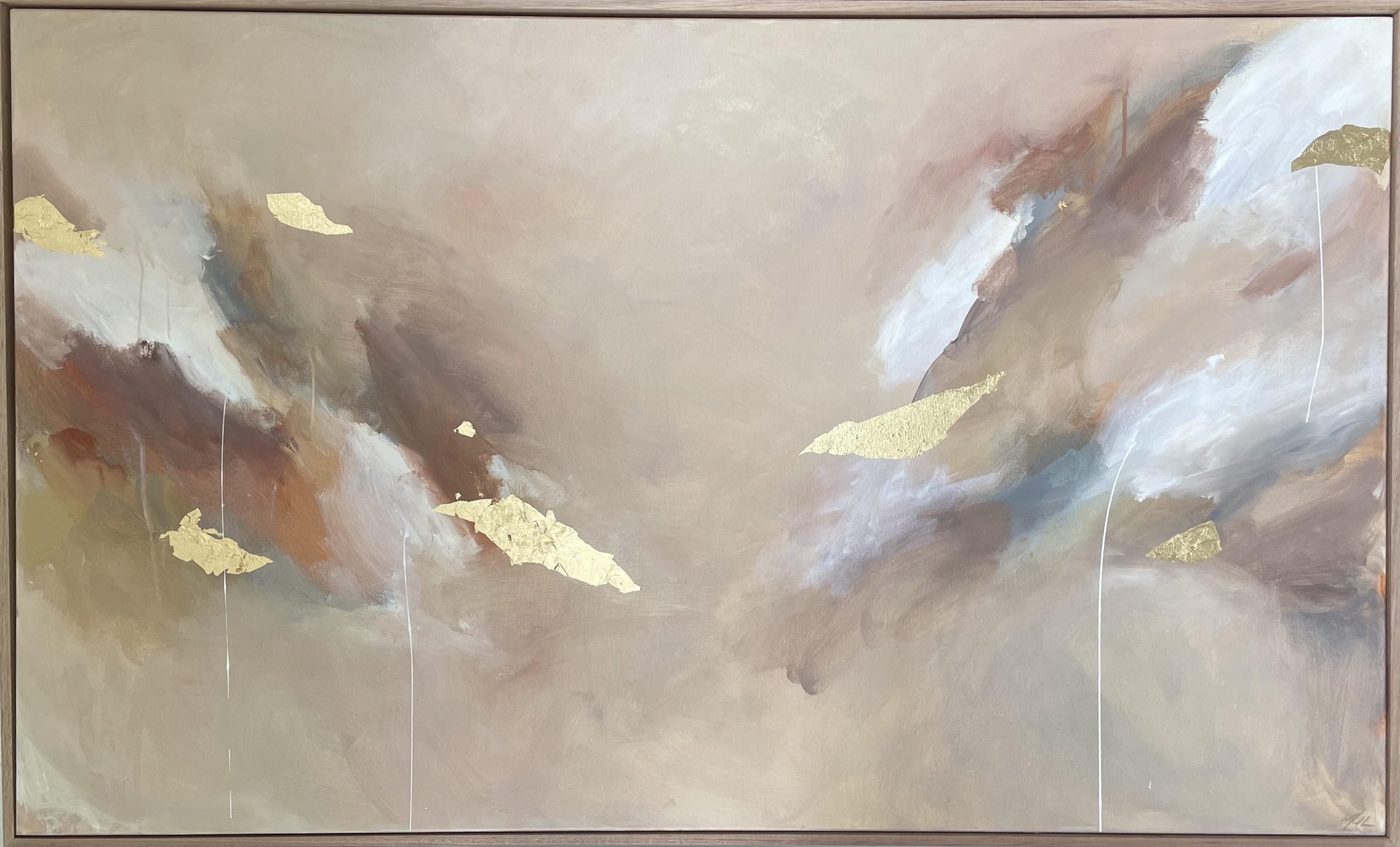 Part of the Dreamer series, this raw, emotional artwork has a depth of feeling that will bring positivity and curiosity to the viewer, drawing the eye in and rewarding you with bursts of vibrant gold.

Matt Wykniet is an artist who paints abstract Australian landscapes using an impressionist colour palette and interpretation of the country side. Following this theme the artist also uses Australian flora to paint elements of their works and further disrupt and distort the landscape. 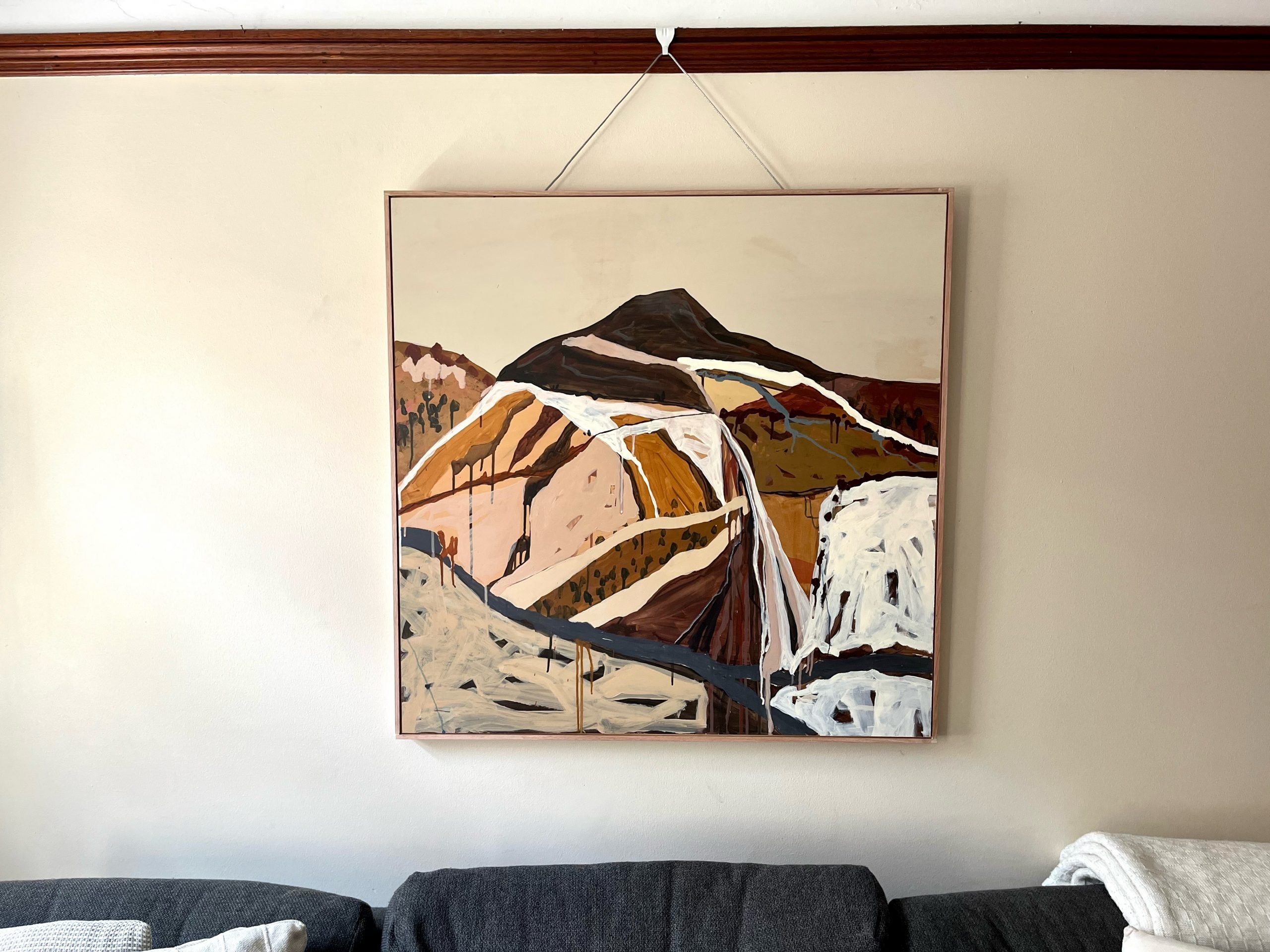 After having his first art show and launching his art career in 2012 he left his finance job in 2014 to become a full time art dude. Mulga loves the beach and surfing and his summer inspired designs bring to life a world where tropical bearded men run rampant, tigers wear diamond sunglasses and gorillas rule the world like some kind of funky planet of the apes.

Mulga enjoys writing a weird poem for his creations because who doesn’t like a weird poem and he reckons it’s a neato way to make people smile. 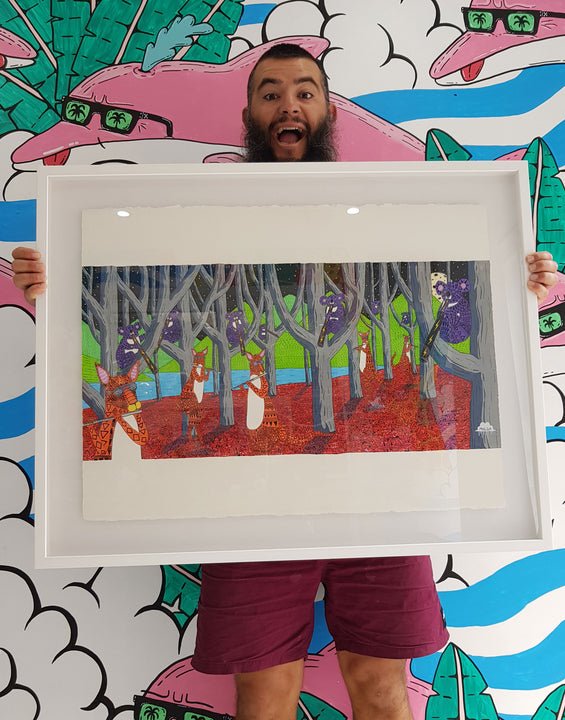 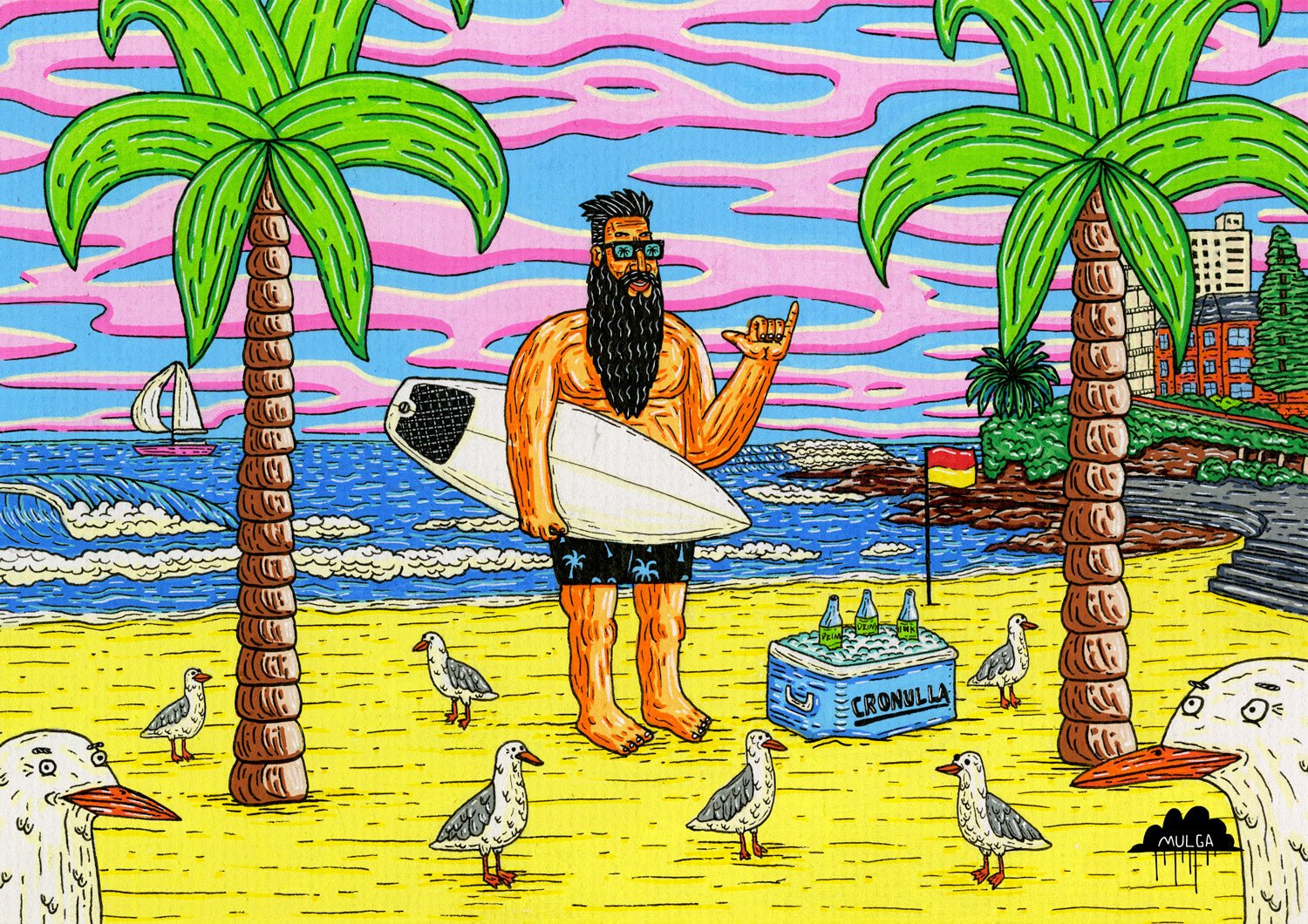 Clifford the King of the Point

Nicci Bedson is an artist who lives and paints on Darawal land. Nicci completed her BCA followed by a Masters in painting in 2009 at the University of Wollongong. She has exhibited throughout the Illawarra and surrounding regions over the past 10 years. Her practice consists of small scale paintings, acrylic on ply and her work can be found in private collections around Australia.

Nicci depicts urban landscapes among reoccurring themes of typical Australian suburban houses, backyards, interiors and chairs. She works from her home studio and frames her own works. Nicci selects her subjects from her immediate surroundings, focusing on the light and shadows that turn something mundane into something beautiful. 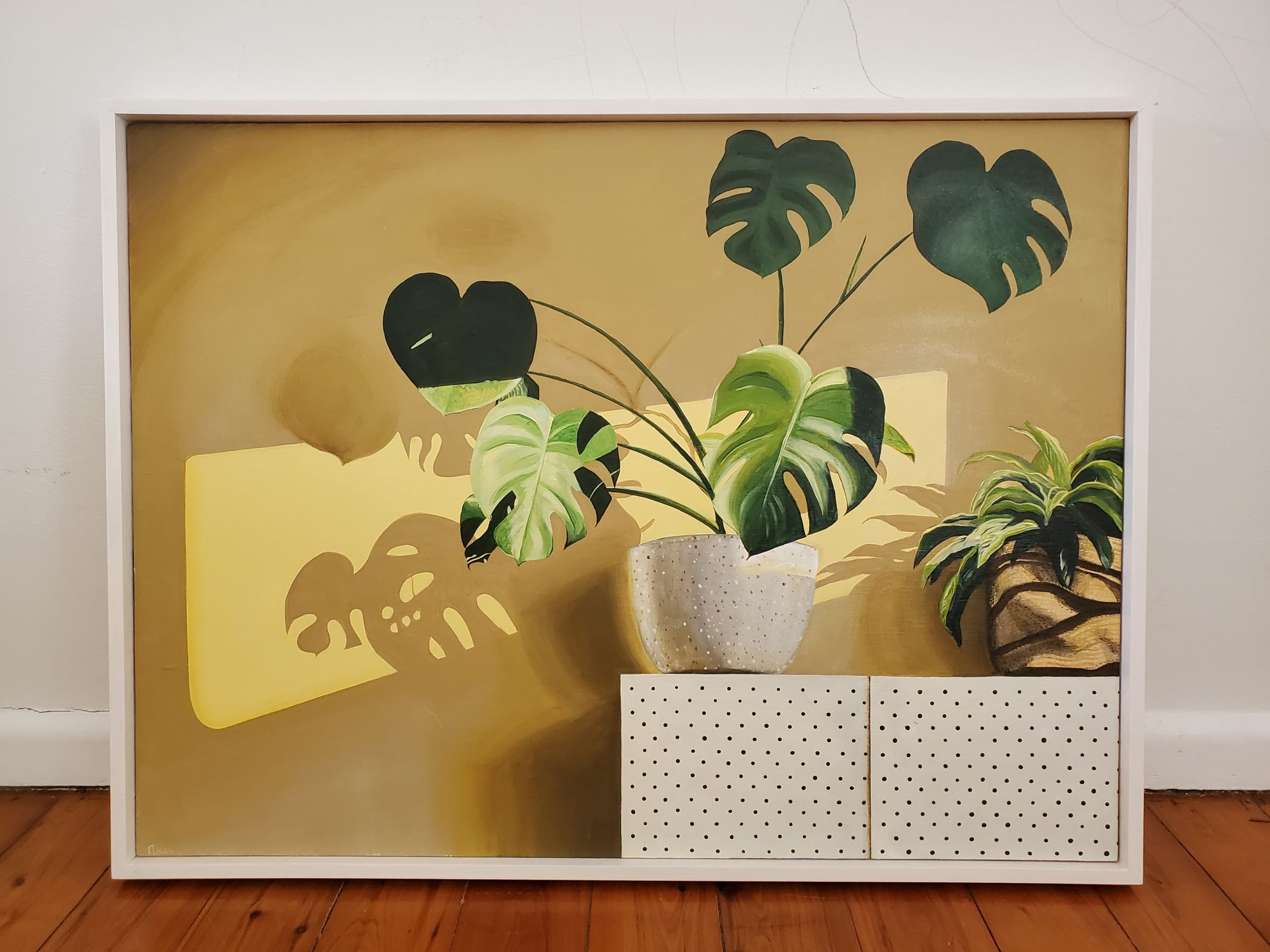 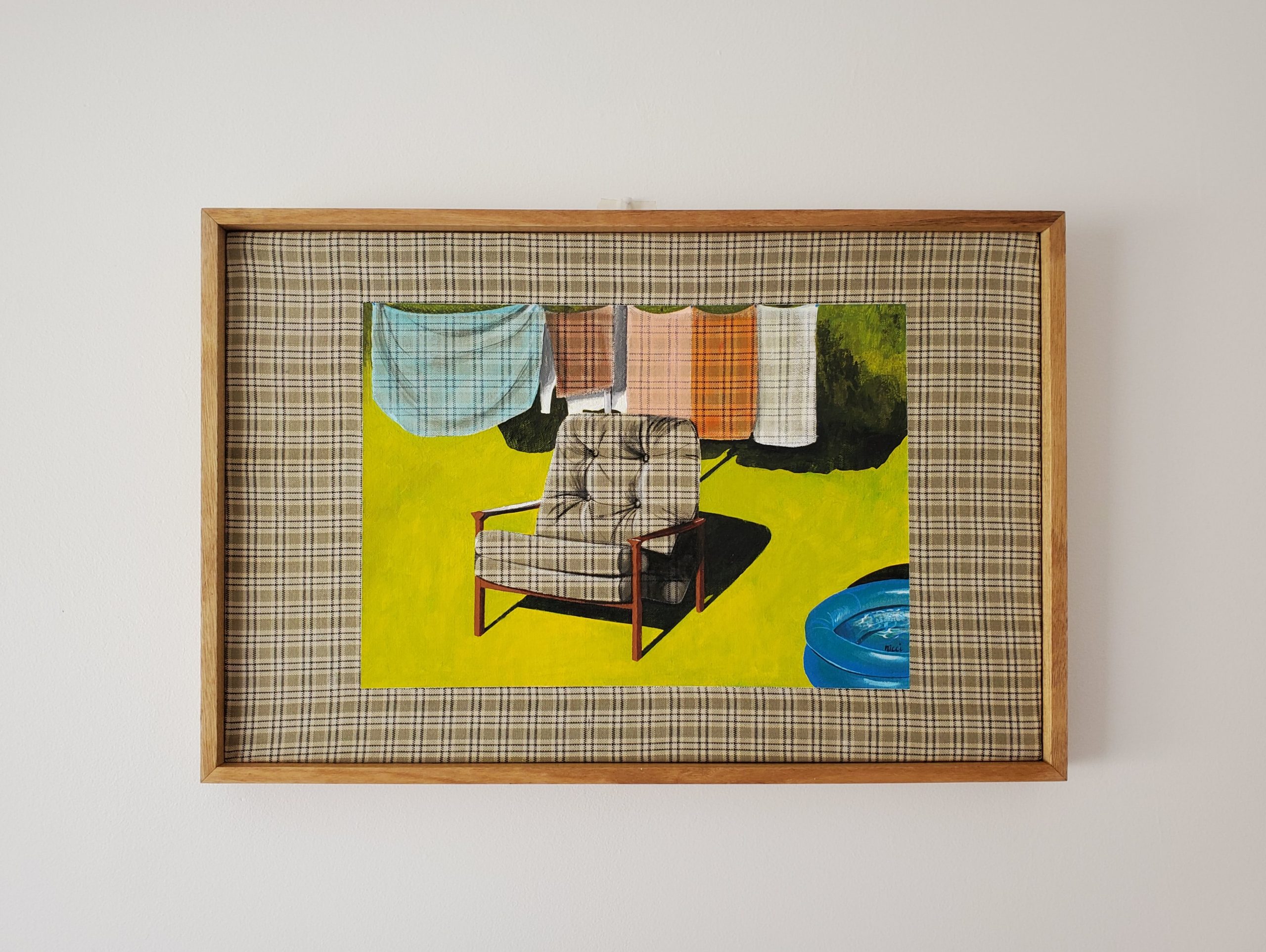 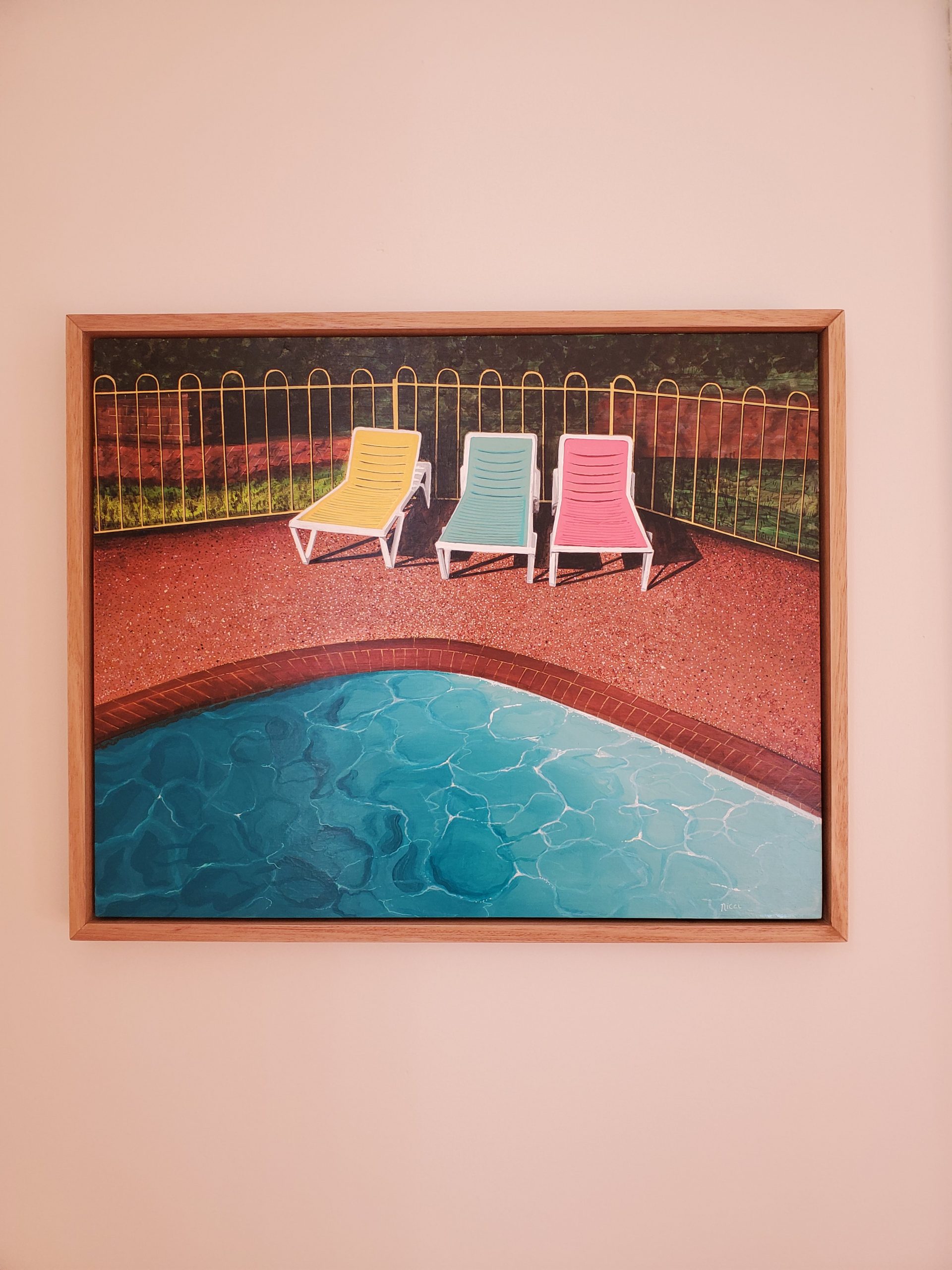 Sally is a full time artist and illustrator, currently completing her Masters in Clinical Art Therapy, and holds a Bachelor of Fine Art through UNSW/COFA. She has been teaching art across all mediums for 10 years, in addition to contracting for arts-based community development programs. Sally has taught workshops with Comm bank, Westpac, Atlassian, Melbourne Uni and EY, and has partnered with clients such as the Salvation Army, International Justice Mission, St George Community Housing and more. Commercial clients include the likes of BMW, Kit Kay and Virgin. Sally's true love is sharing creativity with others. 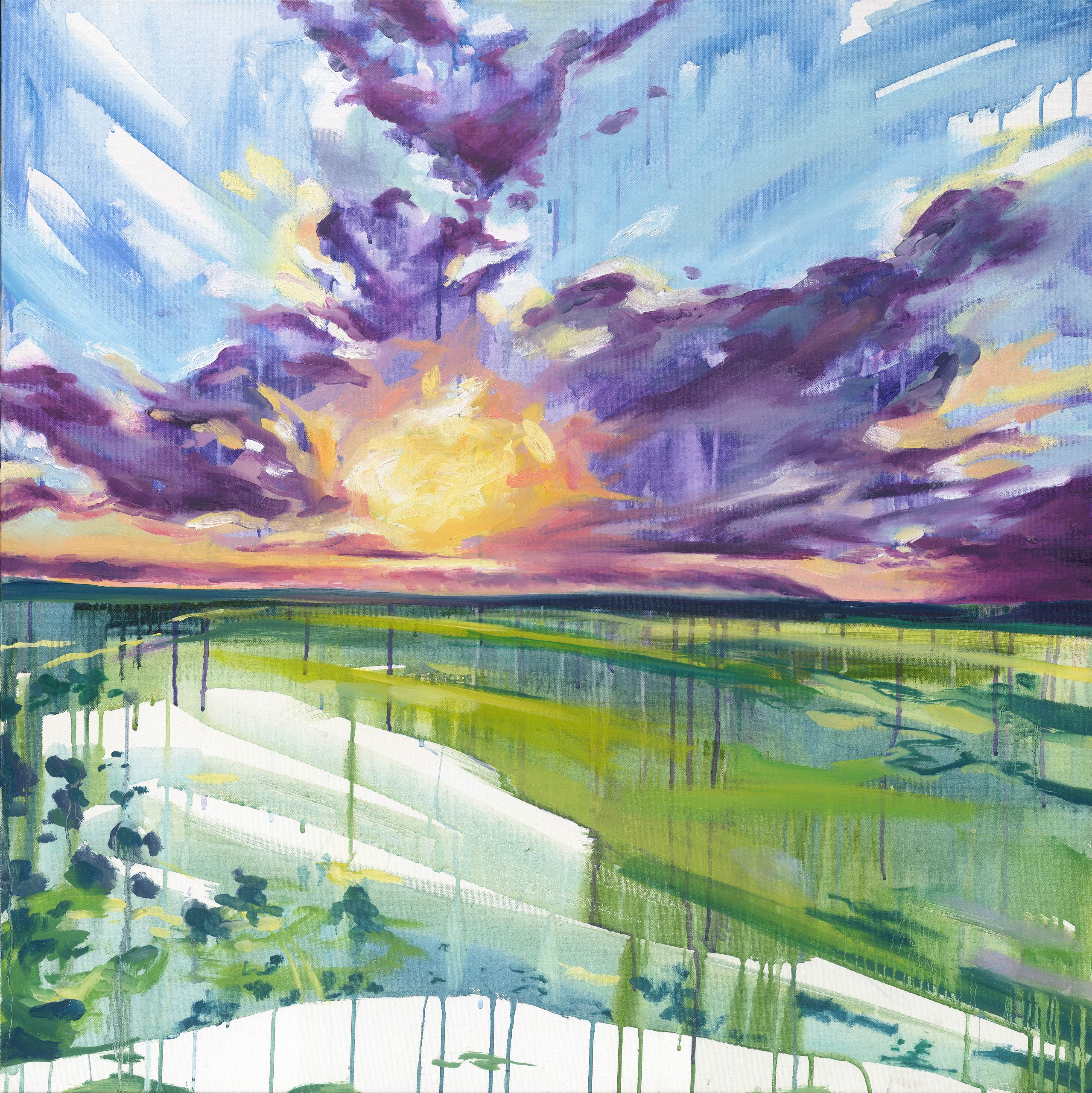 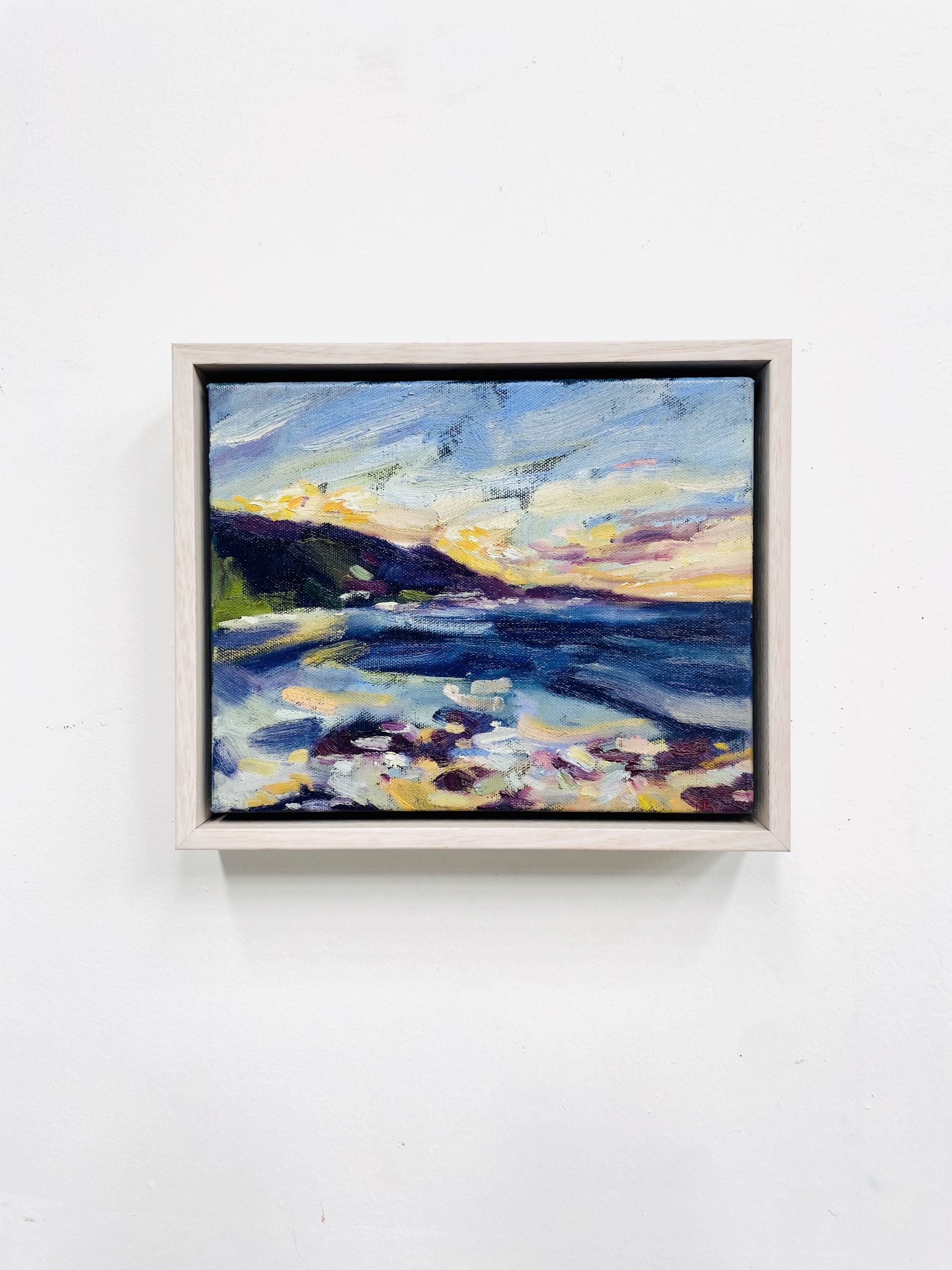 Based on the south coast of NSW Australia, Tanya grew up on a rural property with a lot of freedom and capacity to play imaginatively. She believes these early childhood experiences enriched her ability to surrender to the creative process.

Tanya describes herself as a social landscape painter. Her goal is to explore the Australian identity, stories and pastimes. Tanya seeks to create iconic images, which weave together stories of the land, its people and history. Through the use of nostalgic and sentimental elements sourced from all over Australia, she creates works which speak to the people of their experiences. Tanya says, “construction offers an opening to access the subconscious through materials which in turn trigger the memories of childhood experiences and pastimes. I explore both rural and industrial landscapes and define myself as working in abstraction of the landscape. My use of materials and the interpretations of the places are always constructed through a highly intuitive process.”

In 2008 Tanya returned to her rural roots, completing a residency at Bundanon. She was also chosen as a finalist in the prestigious Wynne prize at the AGNSW. Since commencing work in 2006 Tanya has exhibited in Sydney, Melbourne, Brisbane, Alice Springs and China. 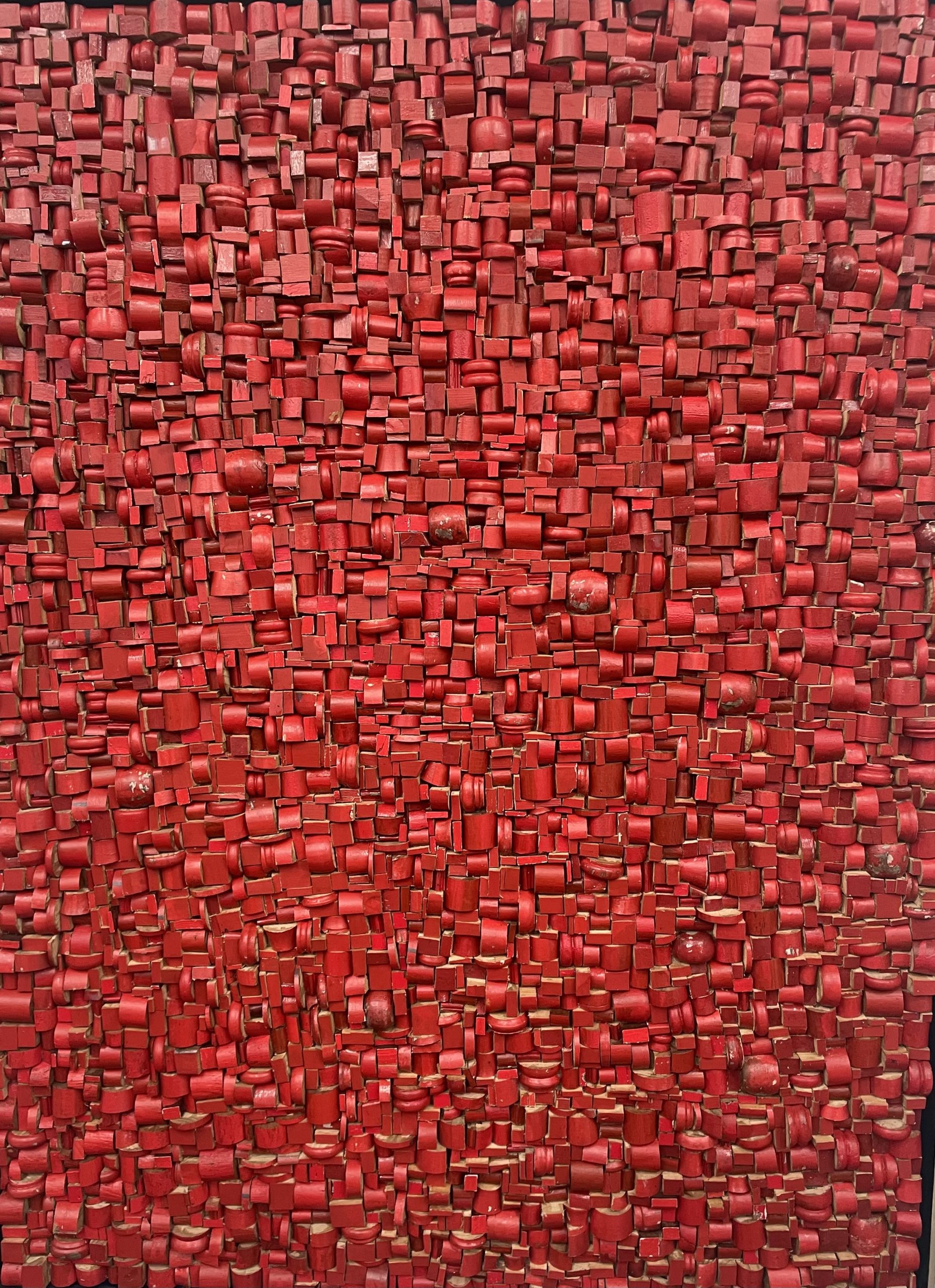 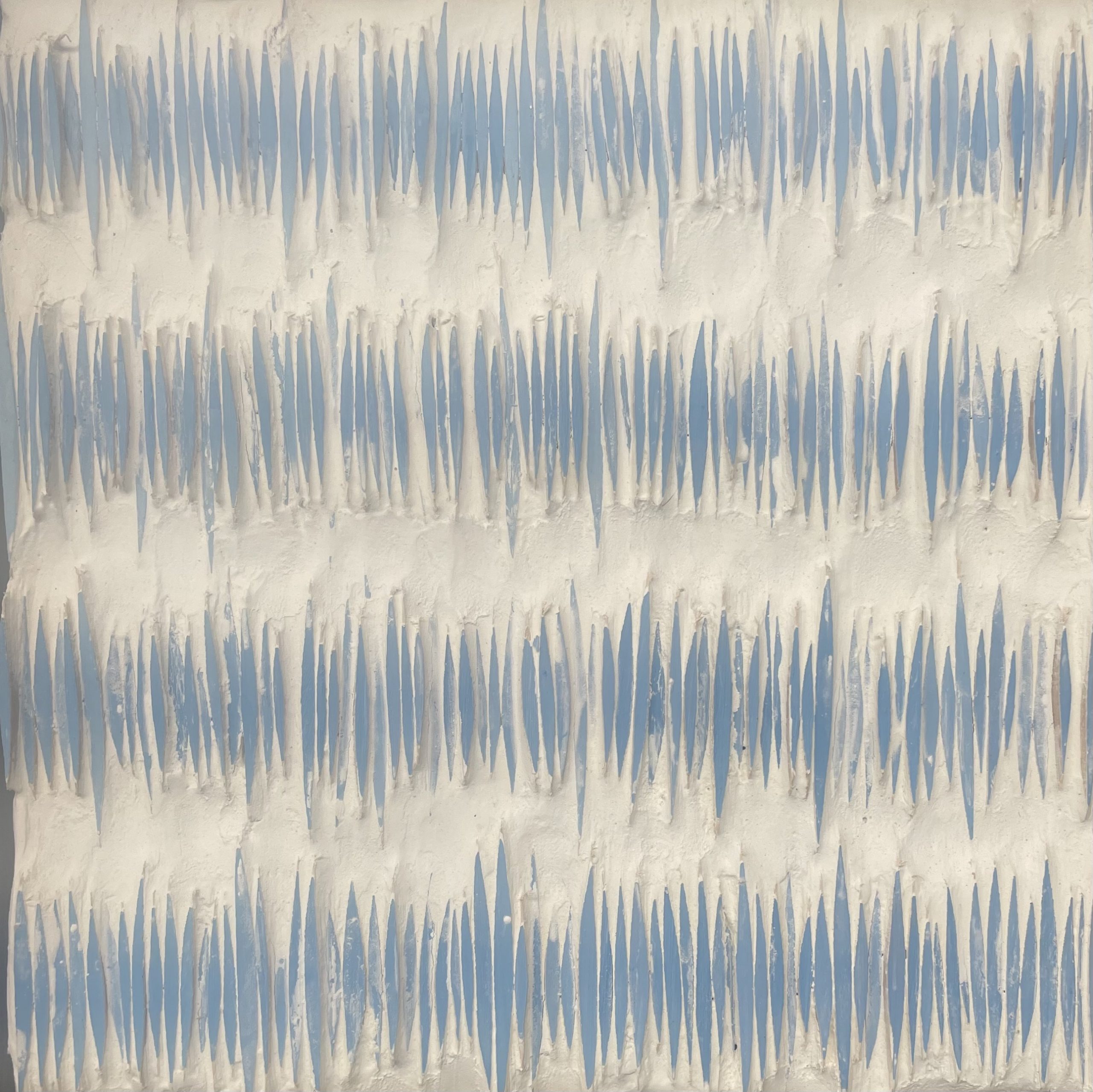 Please email Jess at fundraising@georgiasteele.com.au with the name of the artwork, your bid and your phone number and we will be in touch.
DONATE